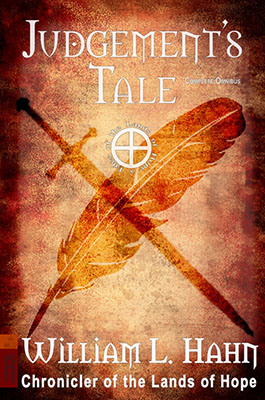 Two millennia of peace are coming to a end.

For twenty centuries the Lands of Hope prospered from their Heroes’ peace, but suffer now from their absence. Chaos slowly grows in the central kingdom of the Lands of Hope known as the Percentalion. It no longer permits safe or reliable travel in or out. Even the bravest adventurers, who for centuries made a living foraying into its midst after lore and treasure, seem unable to do so anymore. The sundered populations of the Percentalion are trapped there, beyond communication and without hope. Worse yet, the liche Wolga Vrule plots escape from his extra-worldly prison to unleash a tide of undeath, and enlists the Earth Demon Kog, who ruled the Percentalion millennia ago, as an uneasy ally.

On the western coast of the Lands of Hope, Solemn Judgement comes ashore, having journeyed with his father for two years across an ocean. Solemn steps onto these Lands both a stranger and an orphan, driven to complete the lore his father died to give him. Will he discover Wolga Vrule’s plan in time to prevent the return of Despair?